The film process has changed this summer because one of the companies that does the majority of the film has changed the way they are operating.  I personally think this is better and a great idea!

Game Time Footage is now called NextPro.  They are the biggest film provider and their film is all individual purchase now.  For Dallas and Austin high school teams the only 2 tournaments that are not using them are Naptown (both cities) and Sweetlax (Austin only).

Next Pro LINKED HERE offers a few different plans so go to compare plans to see what you want to do, then click on events to see what other individual showcases they are doing that your son might also be doing.  They also have many fall tournaments loaded that they are doing and I know that we typically go to several of them.  According to their website you can save 15% if you sign up by June 1st so act now.

What do I do if I want Naptown or Sweetlax Film?

For Naptown and Sweetlax we will stick to the old film process.  If you want film then fill out my google form LINKED HERE. (Please don't email just fill out the form).  If the team price per player gets below the individual price we will purchase it as a team and then the total cost of the film will be divided by the number of players that signed up for film.  Film prices can get as low as $50 per player sometimes even lower but is usually around $100 per tournament.  It all depends on how many people want it.  All film money is payable to the coach on the trip in either cash or check.  We can not accept Venmo as per our accountant.  We do not make money on film.  We offer this because we know how important film is to recruitment and we want you to get it as cheaply as possible.

To follow the links in the chart below you will need to CLICK HERE TO SEE OUR SUMMER FILM CHART. 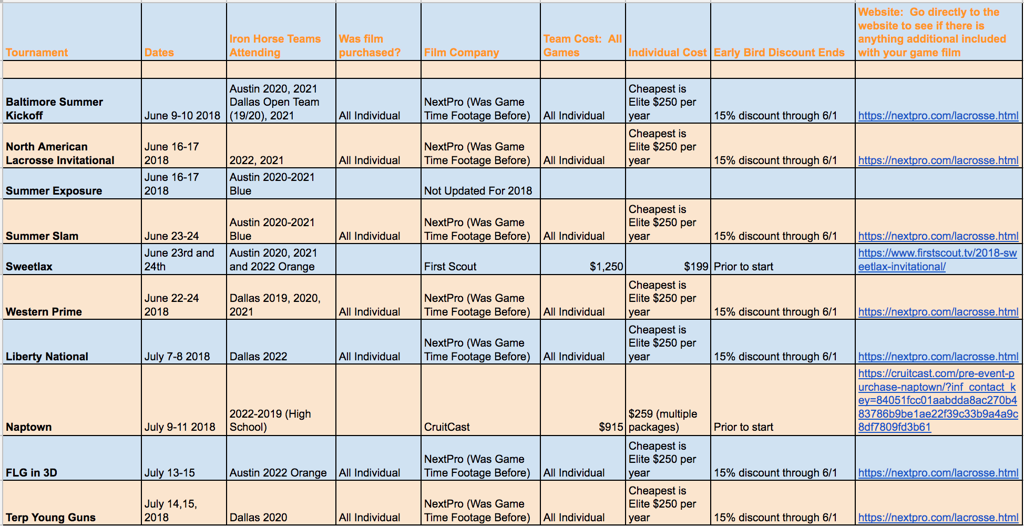 To our 2022's or players that have not played with us before, film is an integral part of the recruiting process.  Its usually the first thing coaches ask for along with grades and test scores.  You need film to get recruited but you also have to do your part after you  purchase it and make highlights of your summer.